Living in the Hudson River Valley of New York for two years forever spoiled us with regard to ski season. The winters may be brutal, but the snow had its perks. We lived about 15 minutes from a small, but adequate ski mountain and were within an hours drive from well known ski destinations and withing 3 hours of ski resort type places. And believe me. We took FULL advantage. There were weeks where we skiied almost every day of the week!

Needless to say, when we moved to Texas, winter was a bit of a shock. There has, so far, been zero snow. Heck, there’s hardly been any cold weather. By January, we were antsy. It was time to see some snow. Some mountains. And break in our ski legs.

We’re normal folks. We work hard. We budget. We can’t go to Colorado on a dime, but we were dying to ski. Luckily, Taos is about a 10 hour drive from Fort Hood and another 30-45 minutes further is Taos Ski Valley. Very doable on a long 4 day weekend, which is what we did. We left immediately following school on Thursday at about 4pm. Split the drive into 2 days, drove 6.5 hours to Clovis the first night and stayed at the Holiday Inn Express there. We were so excited, we woke up at around 6am, worked out real quick, ate and were on the road a little before 8am, which put us at our hotel, The Sagebrush Inn and Suites, at around 11:30am. We booked with American Express Travel, so we were able to check in at noon, drop off our stuff, change and head for the slopes, which was about a 30 minute drive from our hotel! Very exciting. 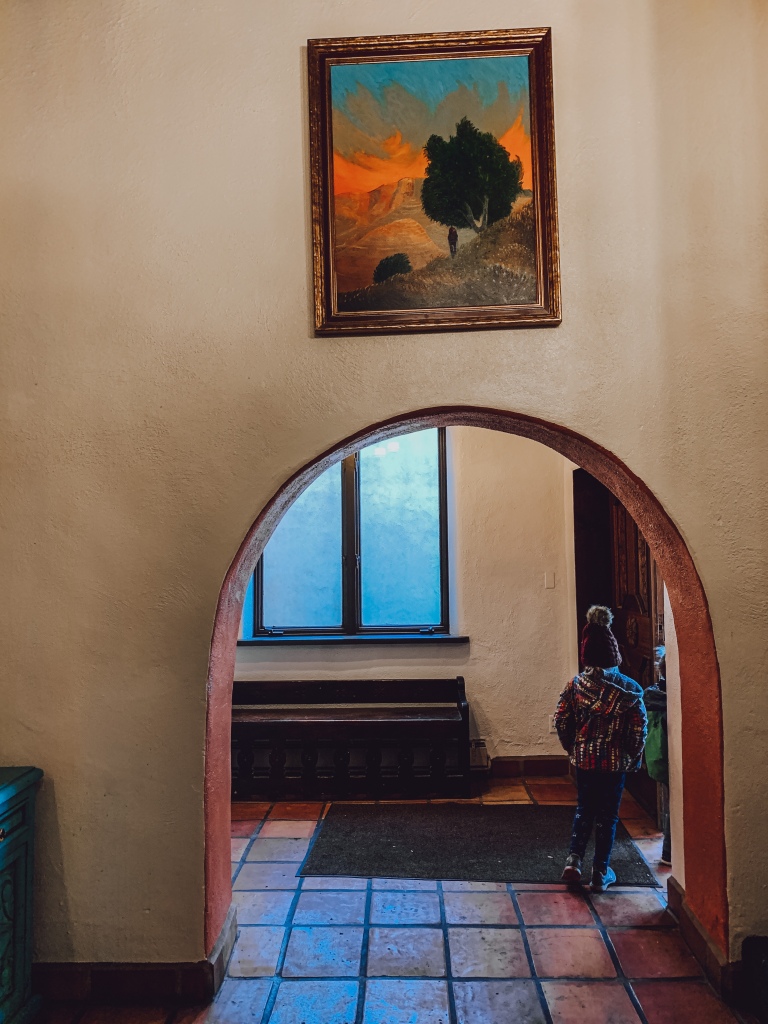 But first, a bit about the hotel! We loved it. It is not super fancy, but it’s very quaint and suited our needs very nicely. I’m a lover of pretty little spaces with a lot of character and it certainly did not disappoint on that end either! We even paid the extra $25 for a suite upgrade, which gave us the in room wood burning fire place. HUGE. I’m the type that almost never springs for upgrades, but in this case it was totally worth it. There’s nothing like a cup of hot cocoa or glass of beer (lets be honest) by the fire with your family after an exhausting day of ski adventures. 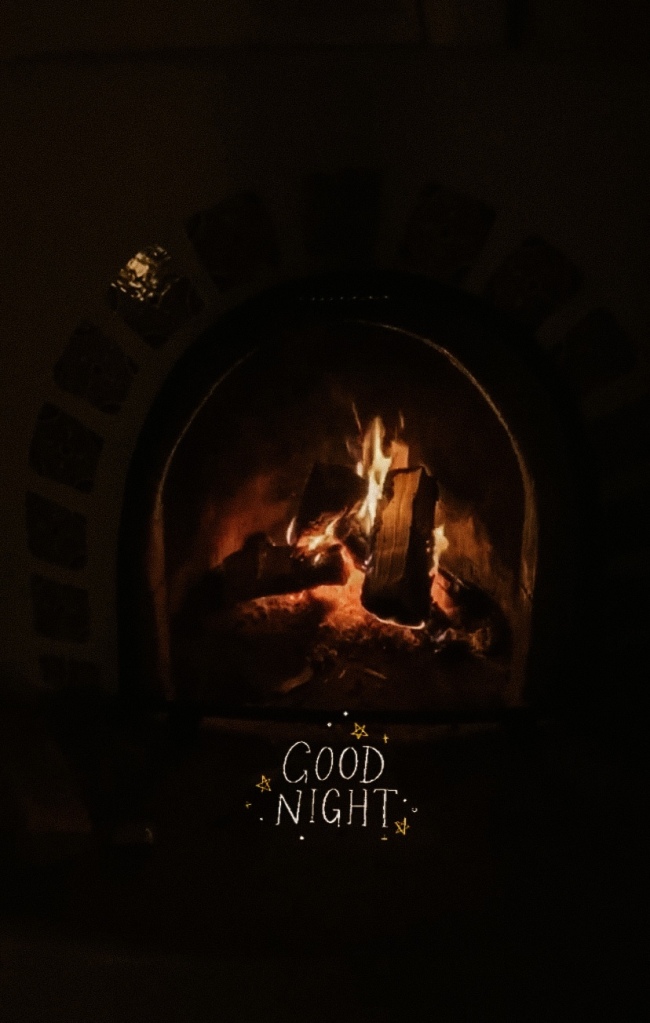 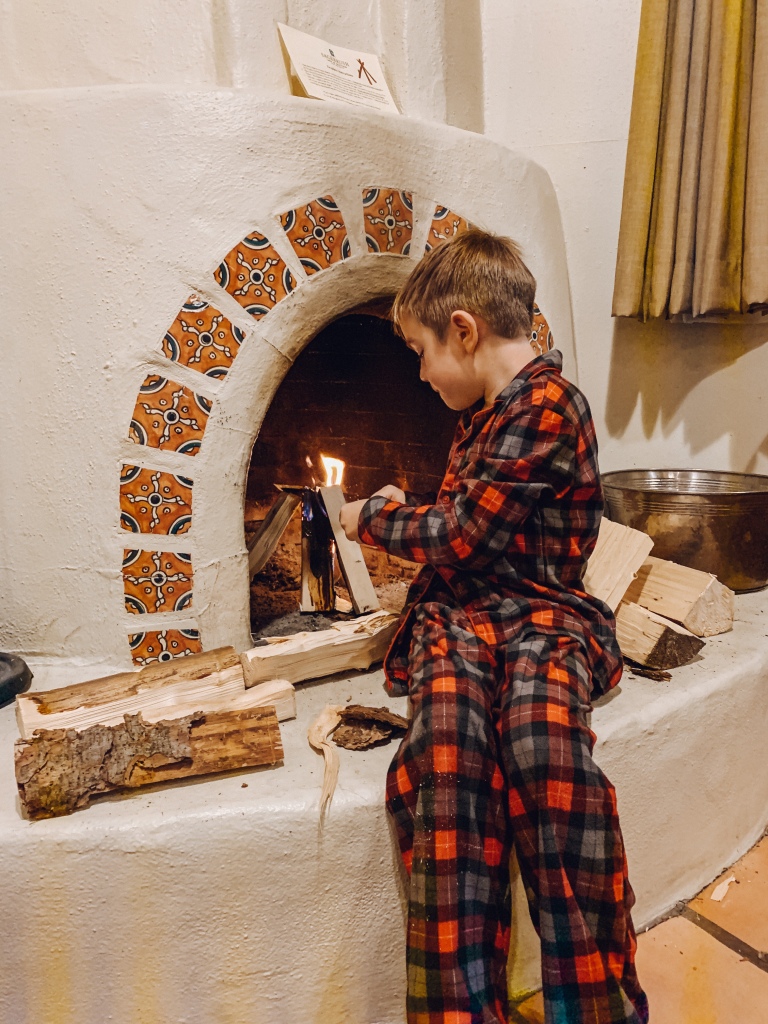 We made it to the mountain by about 1:30pm after a quick lunch stop. The weather was intense. Huge wind gusts and snow. Ideal for expert skiers maybe, but made our kiddos a little nervous. Never the less, we had them strap on their gear and give it a go. The Taos staff was extremely helpful and encouraging. Even though our ski school reservations weren’t until the next day, they let us use their little magic carpet and bunny hill since it was practically empty because the conditions were so intense. The kids and I were able to break in our skis a bit and find our ski legs. My husband and I were also able to check them in, sign our waivers, get them sized etc… you know. The thing that takes FOREVER the morning of and where you find yourself in those long terrible lines wondering what the heck you were even thinking trying to ski as a family…

But I digress. We skiied and took care of business for a couple hours and were back in our hotel room by about 4:30pm. 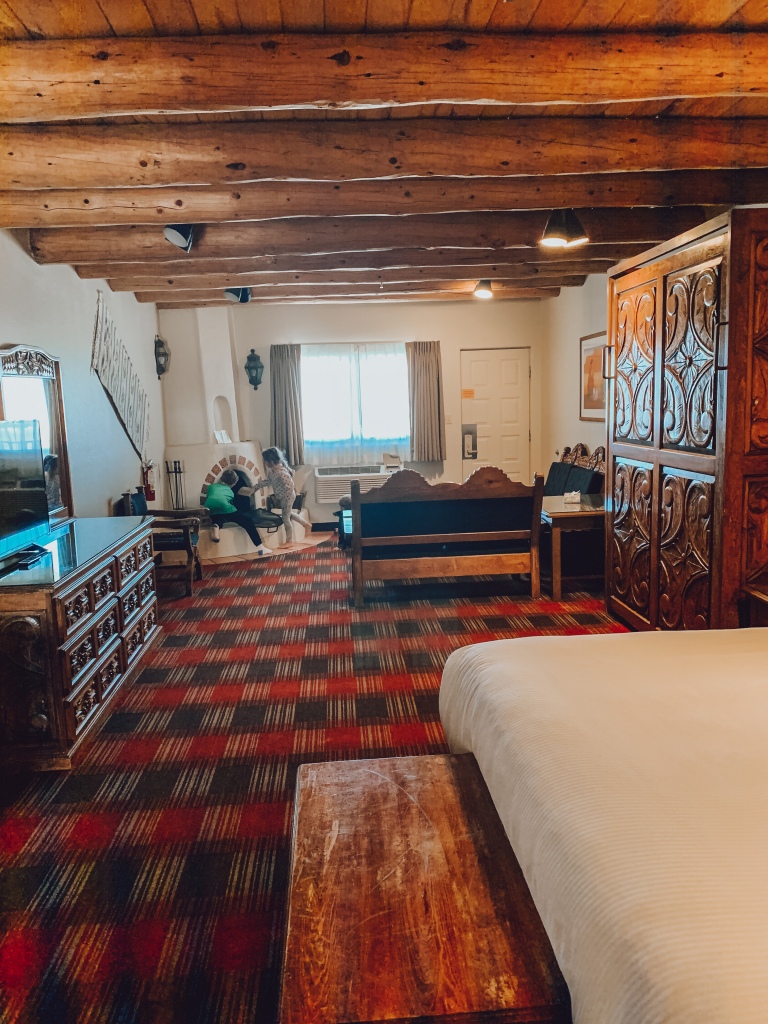 Since we drove, we were able to pack a bunch of appetizers, snacks and *ahem* a few libations of sorts and promptly broke into, well, all of them before hitting the hot tub for a bit.

I will admit, the hot tub was outside, with no way to get to it other than walking outside, which isn’t ideal with 3 kids in the freezing cold, but worth it in the end for the wind down. The hot tub was also pretty basic, which suited us just fine, but might not be your thing if you’re into the fancy stuff. Another plus for us, was that it was practically empty most of the time. Which IS ideal when you have 3 excited kids, eager to tell you their days ski adventures at the top of their lungs…

After the hot tub, we went back to the hotel, lit a fire, ordered a dinner of pizza and wings from the very fancy Dominos, and promptly went to bed. 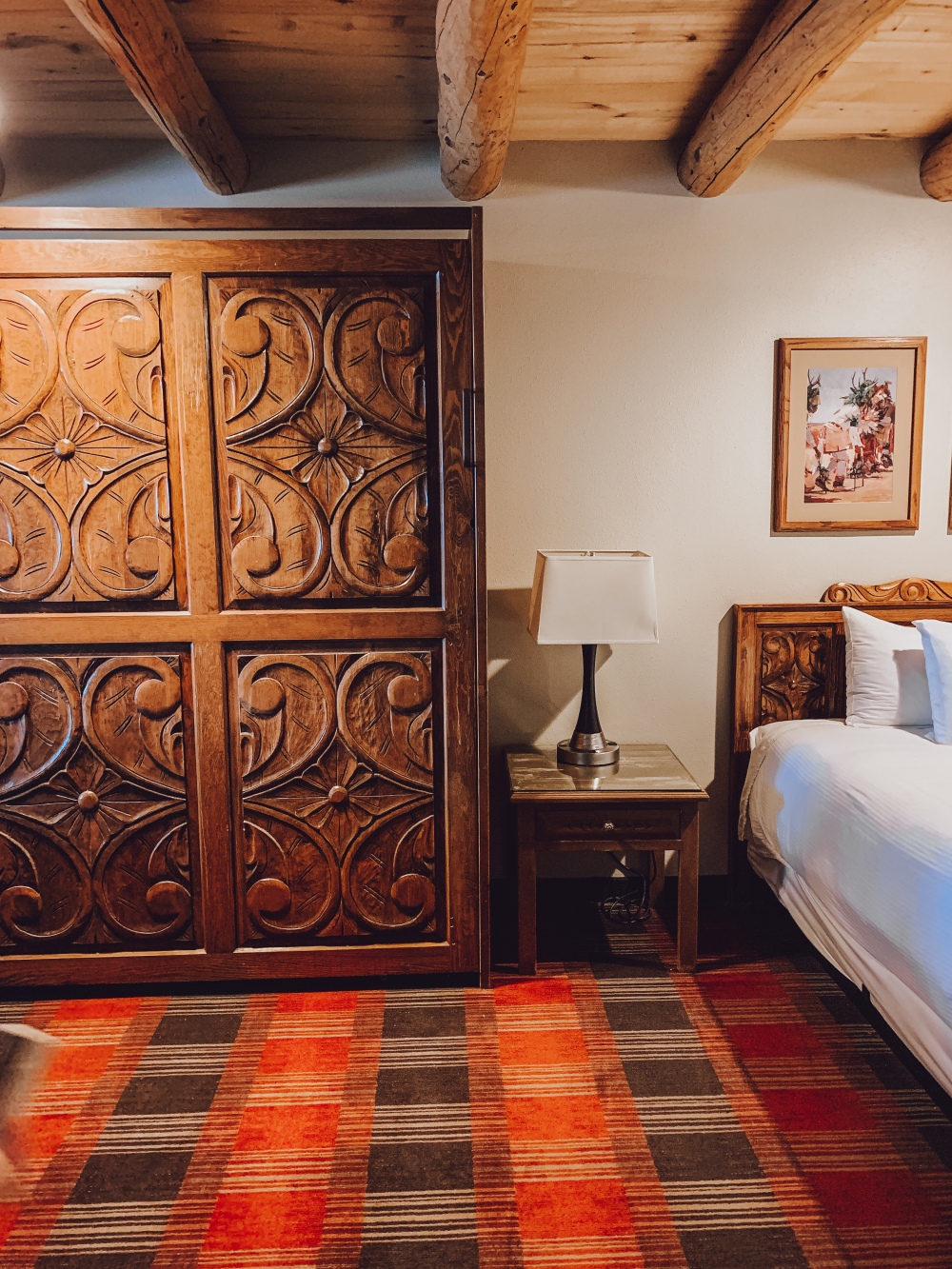 In retrospect, I wish I would have brought some board games, and will definitely do that next time. We’re a big board game family and board games by the fire… well it’s almost as good as the actual skiing if you ask me. This was just our first time and it’s just, well hard to think ahead and pack clothes, skis, swimsuits, food, beverages, ski equipment etc. for FIVE people! You’re bound to forget a few things.

The next day we started with breakfast at the hotel, which was basic, but everything you wanted before a ski day. Not tons of variety, but lets face it, you’re there to fuel up quickly so you can be on your way! At least we were. Menu wasn’t large, but the coffee was hot, eggs were fresh scrambled, the biscuits and bacon were hot, the gravy was hearty and the oatmeal/granola/toast station was great for a few takeaway snacks. In about 15 minutes our entire family of 5 had eaten our fill, grabbed our coffees and hot cocoas and were on our way.

Day 2 on the slopes was about as epic as it could be (for us). Taos Ski Village has everything you could want and was lively and bustling. The village had all kinds of eaterys, ski shops, specialty shops, outdoor fire places and a touch of that Santa Fe/New Mexico personality and color that made it its own. I thoroughly enjoyed it.

Taos Ski Mountain was, IMHO, everything you could want. There are 110 runs, back bowls, moguls, all kinds of terrain, greens, blues, forest trails etc. And it was pretty easily navigable with the map! I am not a super adventurous skier, but enjoy the greens, blues and occasional easy(ish) black if I’m feeling frisky. My husband, on the other hand, is a mogul lover, the steeper the faster the more rugged the better type guy. And we were both super happy. There was also TONS of fresh powder and the slopes were pretty well groomed. Fresh powder kind of freaks me out personally because you don’t know how deep it goes, but I hear most people love it. I don’t know if it was a fluke, but there was TONS when we went. I can’t tell you how many experienced skiers I saw wipe out when the slope went from well groomed to instant powder…

There were also strategically placed stops like the Whistle Stop and Breweries/restaurants like The Bavarian that you could stop, rest at and grab a beer. Like I said. It really was everything you could want. I feel like my husband and I got in like 20 dates in one day. It was spectacular. We chatted on the lifts, split a few beers, and got in some good quality time.

And on that vein! A quick word about the Riu Hondo ski school there: it’s the best. The program was solid and I felt like each kid was very adequately placed according to their skill. The intructors made sure the kids were bundled and took frequent hot chocolate snack and meal breaks throughout the day. The instructors are patient, kind, knowledgeable, fun and, well, bloody well SAINTS if you ask me.. Taking a group of kids down a mountain several times and having them all enjoy themselves is just next level to me. All of our kids, including our 3 year old, were visibly upset when the day was done and wanted to keep skiing. I’m usually up for all kinds of adventure, but I was WIPED. Since we had our own equipment and checked the kids in the day before, we literally dropped them off at about 8:40am, and were on the slopes by about 8:50am and skiied until we picked them up at 3:30. I had literally 0 gas left in the tank, but I cannot say enough good things about Riu Hondo. It was about $200/kid/day and worth every penny. 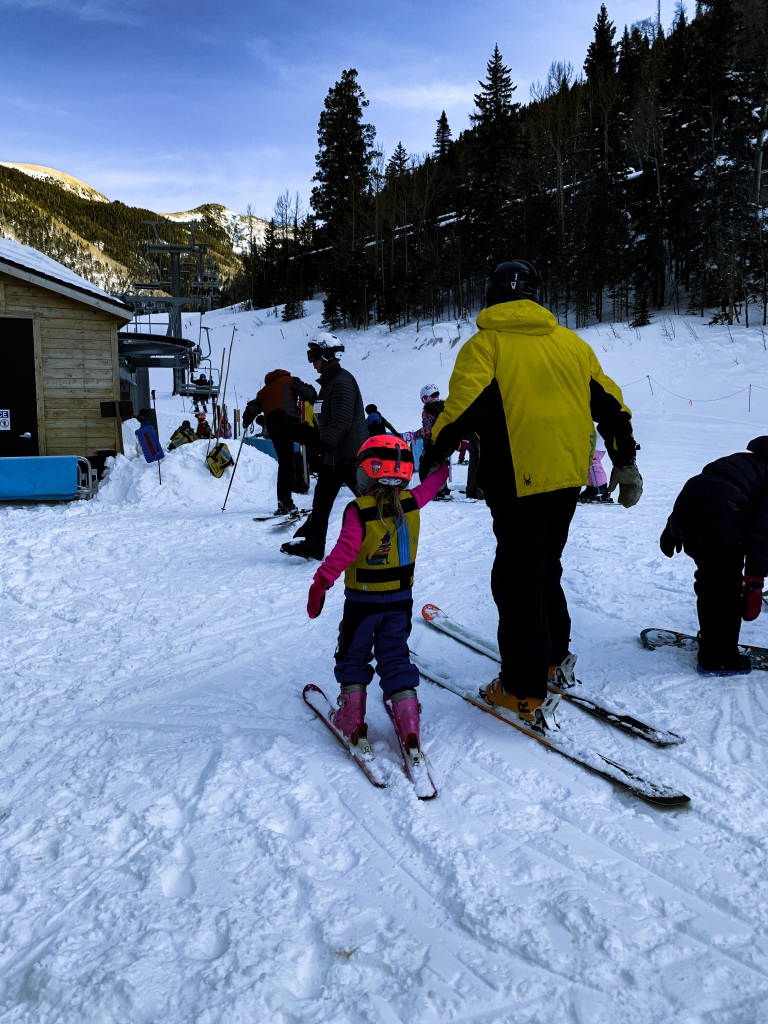 After our ski extravaganza, we were wiped. We headed back to the hotel and barely made it to the hot tub we were so tired. We decided to eat at the Sagebrush restaurant for convenience sake and weren’t disappointed. I got the fish tacos, which were well seasoned and just what I needed. Their specialty was the prime rib, which my husband got and said was delicious. The menu is not very large, which I love because I tend to be indecisive, and the food was well seasoned and delicious. 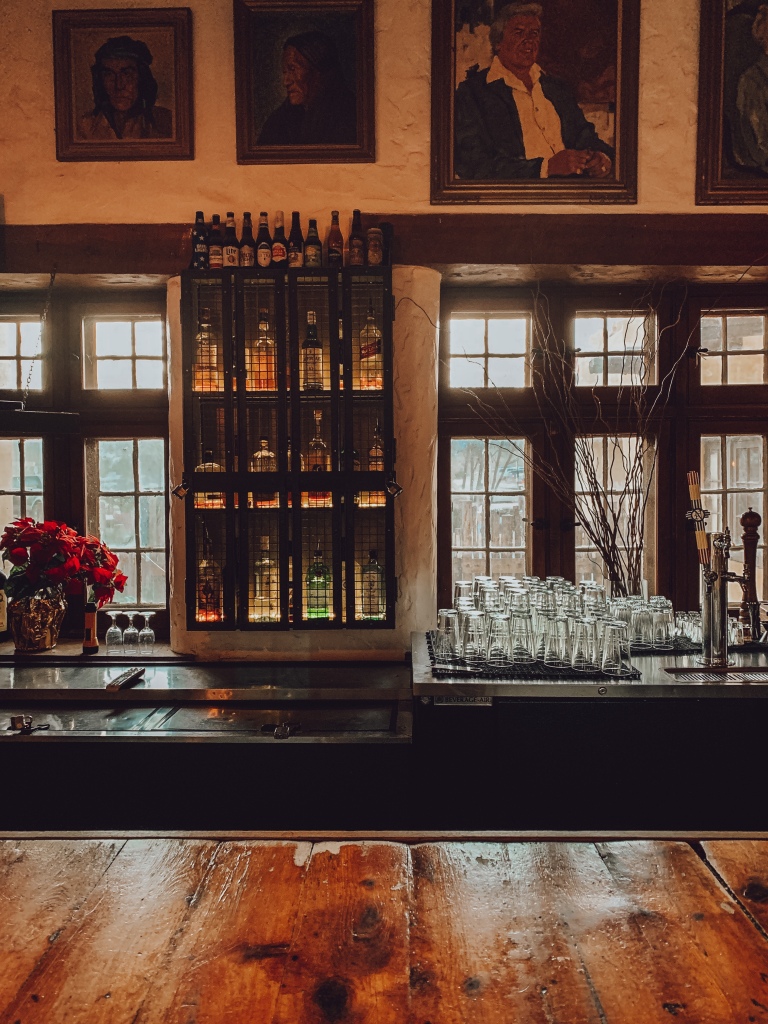 We were all pretty much asleep by 7:30 (in our defense, it was 8:30 our time). A sure sign of a good day. Our early bed time had us up by about 6 am which was perfect for a long drive day ahead. We packed, ate a quick breakfast and were on our way by about 7:30am.

Personally, I thought the drive was amazing. I love seeing different parts of the country and I had never seen a high desert before. The desert like landscape with cacti, sagebrush dusted with snow was extraordinary set against the backdrop of the mountains. It was truly breathtaking and honestly did not get old. We drove straight through, with a stop at Lubbock Lake Park for a small hike, which was actually a pretty cool archaeological dig site that provided some intrigue and adventure for the kiddos. We ended up making  it home by 8:30pm. We are eat in the car type folks and the drive was mostly 2 lane, which made bathroom and gas breaks really conveneient and efficient (ie no getting off the highway etc.). We always try and stop for about an hour for a walk in the park or a quick hike. It does wonders for the kids, the drivers stamina and the fresh air and vitamin D feels amazing.

Once all was said and done, I wish we had stayed an extra day. I underestimated how nice it would be, but it was our first time, so I’ll cut myself some slack. We will definitely be back. Stay longer. And bring board games! We also might actually plan ahead and stay in Taos Ski Valley. The 30 minute drive is not long and not bad, but when you’re exhausted after a day of skiing, it seems a little longer. It does book up though, so next time we’ll just plan in advance. Haha… stay tuned for Taos Ski Village part 2!

Thanks for reading and I hope it helped/helps somebody out there plan their ski trip!