Thinkin’ all kinds a thinkin thoughts with these 2 atop the iconic Cadillac Mountain. 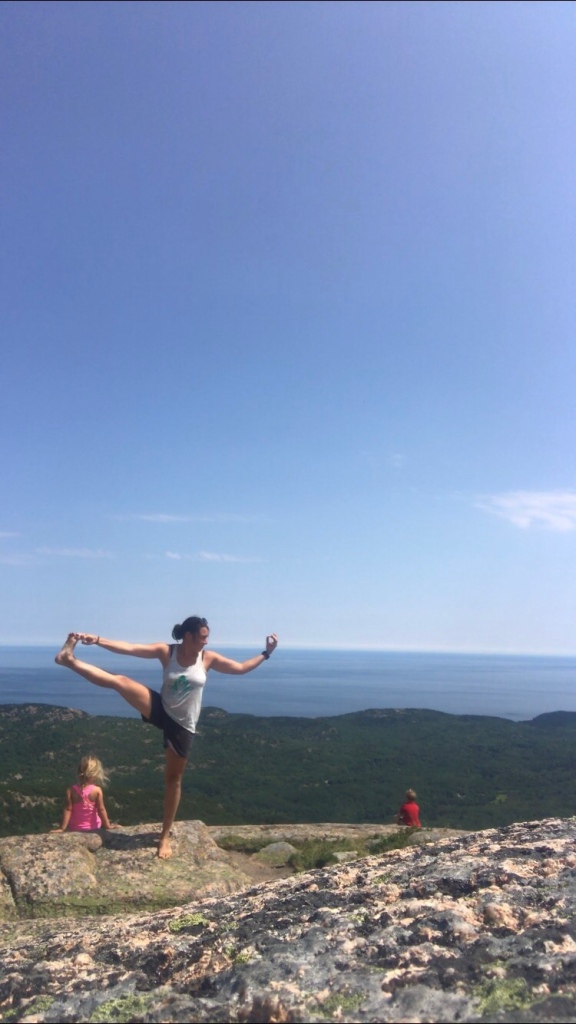 Route: Boston to Acadia National Park/Bar Harbor to The Berkshires back home to the West Point, NY

I had a lot of questions on this road trip itinerary so here it goes. This post could go on for PAGES as I could never even hope to capture the magic of this trip in a million words, but here are the rough details of our Boston/Bar Harbour/Acadia/Berkshires Road Trip. I did it solo with 3 young ones because I’m crazy. We went pretty hard in the paint here, so this can easily be broken up into multiple days, but we had a whale of a time this way. Admittedly we were pretty worn out afterwards, but it was worth it. I was amazed at how well this route worked out. It will forever be one of my favorite road trips/family experiences of all time.

Day 1: We left the house at roughly 8am and drove to Boston (~3.5 hours). I knew I wouldn’t have enough time to give Boston the several days of exploring it probably deserves, but I wanted the kids to experience a condensed Boston experience: rich in history, geography, literature (as liters as Make Way for Ducklings can be), scenery and fun. With all of this in mind, I figured a walking tour would be best. It took me a few days to plan this out, but this was my best effort in accomplishing that goal!

We parked in Boston Commons and did the Boston Commons things. We rode the swan boats, played in the splash pad, saw the Ducklings statues, went on the merry go round and walked a bit of the Public Gardens. From there we walked to the Harbour and played played in the epic parks there right by the waterfront. From there we walked along the water to Beacon Hill taking in all the boating scenes. I felt like we had to visit BH because… it’s Beacon Hill! It’s such an iconic and historic location. We didn’t do much there, but we admired the it in its hilly, cobble stone-y splendor and we can say we saw it! It really is an absolutely beautiful spot and the kiddos got a big kick out of the Cobble Stones. We left Boston at around 3:30pm, drove another 2 hours and stayed in Portland, ME where we ate a nice dinner of gas station lobster rolls and CRASHED. Hard core. I’m pretty sure we stayed at a Holiday Inn Express because those are my go-tos on the road. I don’t put TONS of effort into the exact place we stay on the road. I just look for safe, reliable, comfortable places to rest our heads after all of the activity!

Day 2 we took the scenic Route 1 to Bar Harbour/Acadia and it took us about 3 hours. We could have taken the Highway and shaved 30 minutes or so, but the scenic route is SO worth it. You drive through forests, you’re by the water, you drive through small towns, that I felt like, really gave you an appreciation and vibe for the area!

We arrived in Acadia National Park at around 1pm, checked in and drove to the iconic top of Cadillac Mountain just because we HAD to see it! 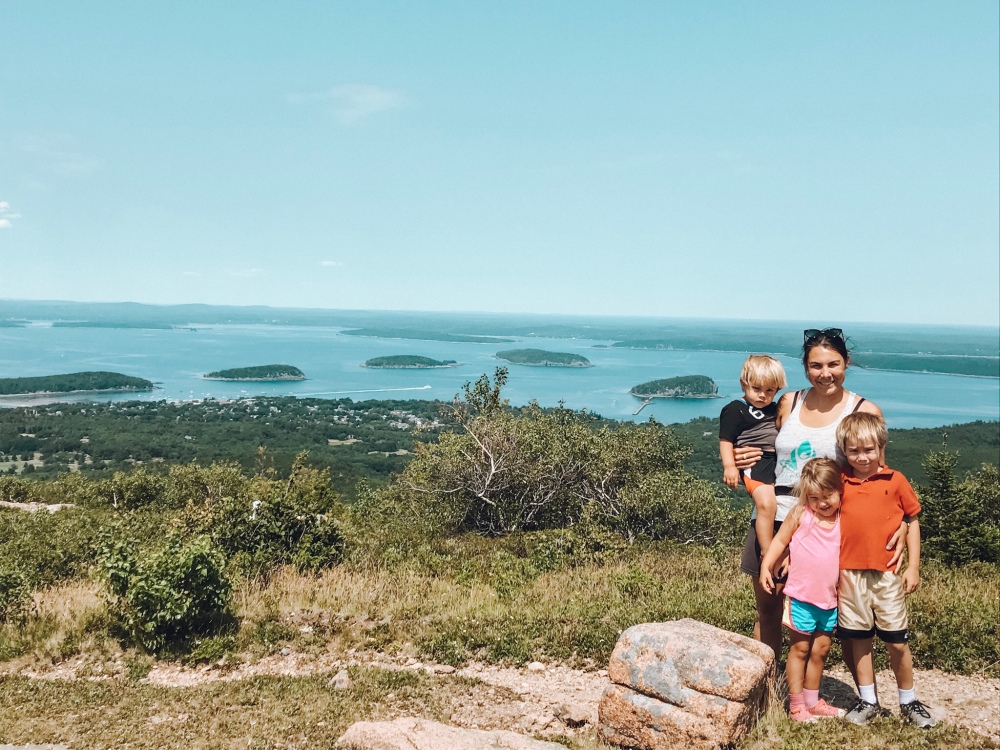 We then went to Jordan Pond House for lunch, tea and popovers. 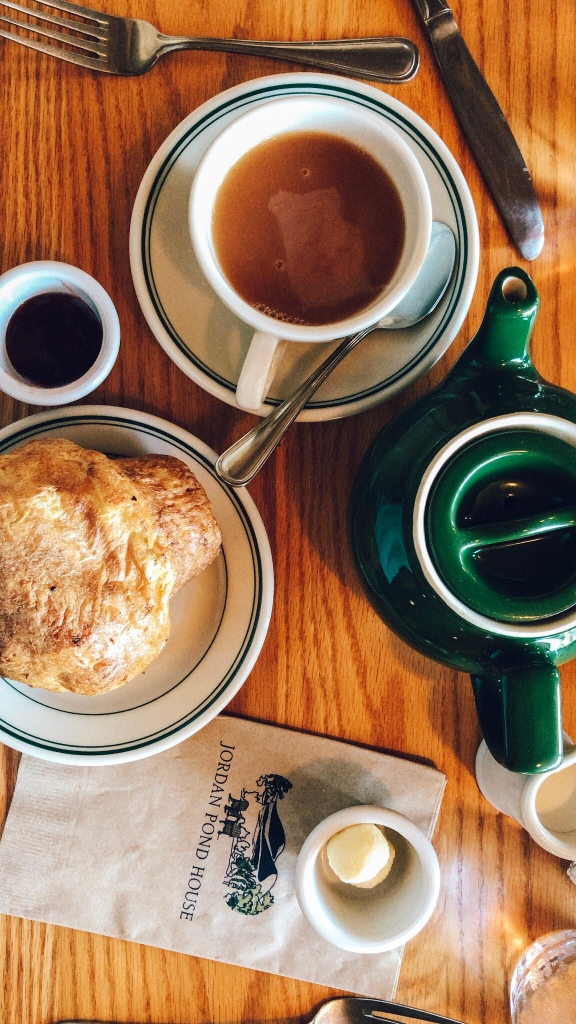 From there we walked around Jordan Pond (really more like a gorgeous lake with incredible mountains at every turn, but hey– tomatoe tomahto) and had our very harrowing hike up to Bubble Rock. From Jordan Pond, you can hike the back way up Bubble Rock, but it is an Expert Climb.

I love hiking with my kids, but I wouldn’t say that I am experienced in terms of the degrees of hiking difficulty. It definitely took me and my 3 (ages 7,4 and 2!) by surprise, so I would definitely advise you to heed the difficulty ratings! We made it, somehow, by the grace of God, but we were definitely scaling cliffs and jumping from boulder to boulder and shimmy-ing up crevaces for much of the time! We ended catching up with a tourist group at the top, who legitimately couldn’t believe it when our little heads emerged over the op, lol and trekked back down, using a much safer route.

I mean, look at these photos from our hike. I should have known! 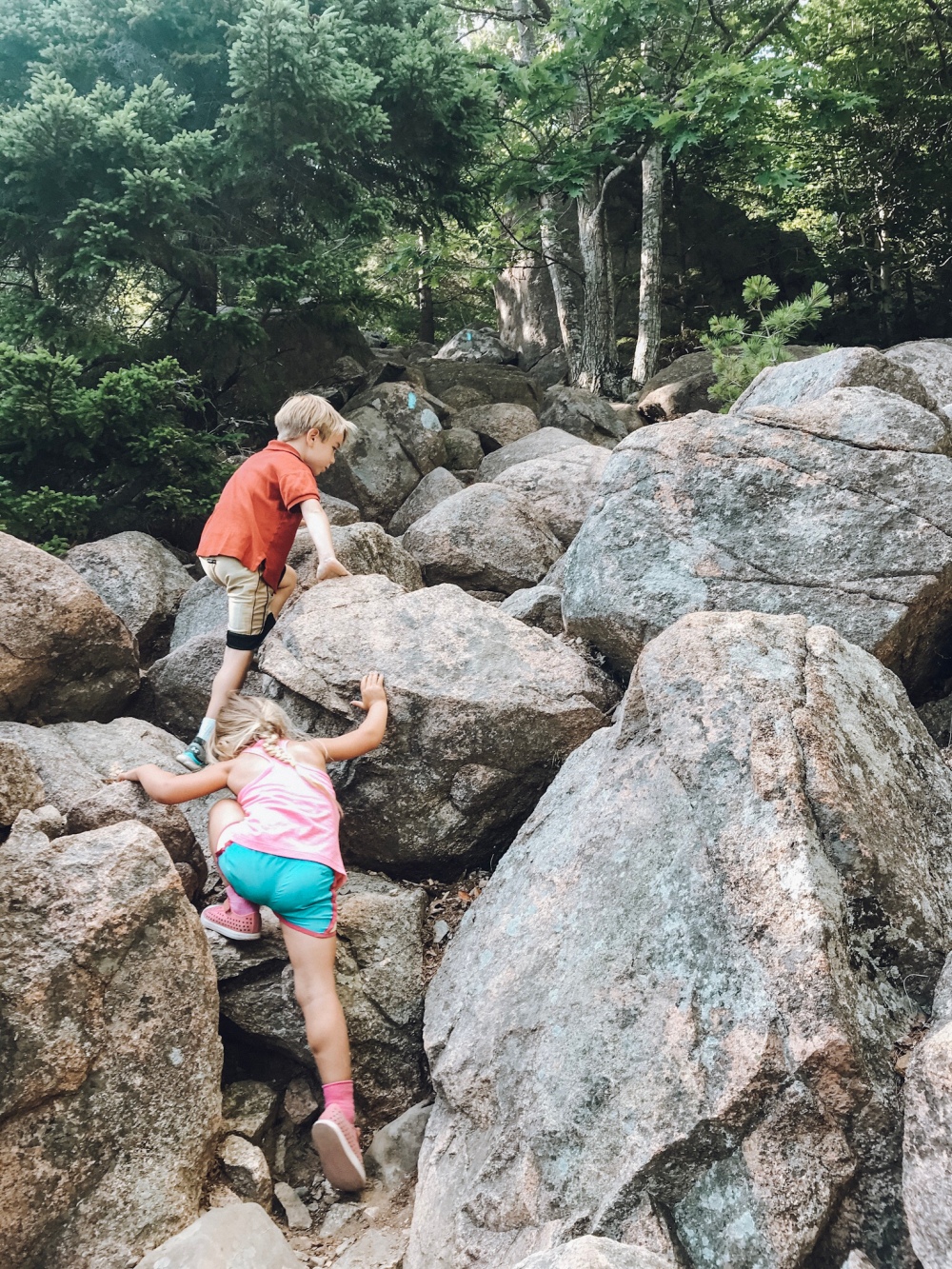 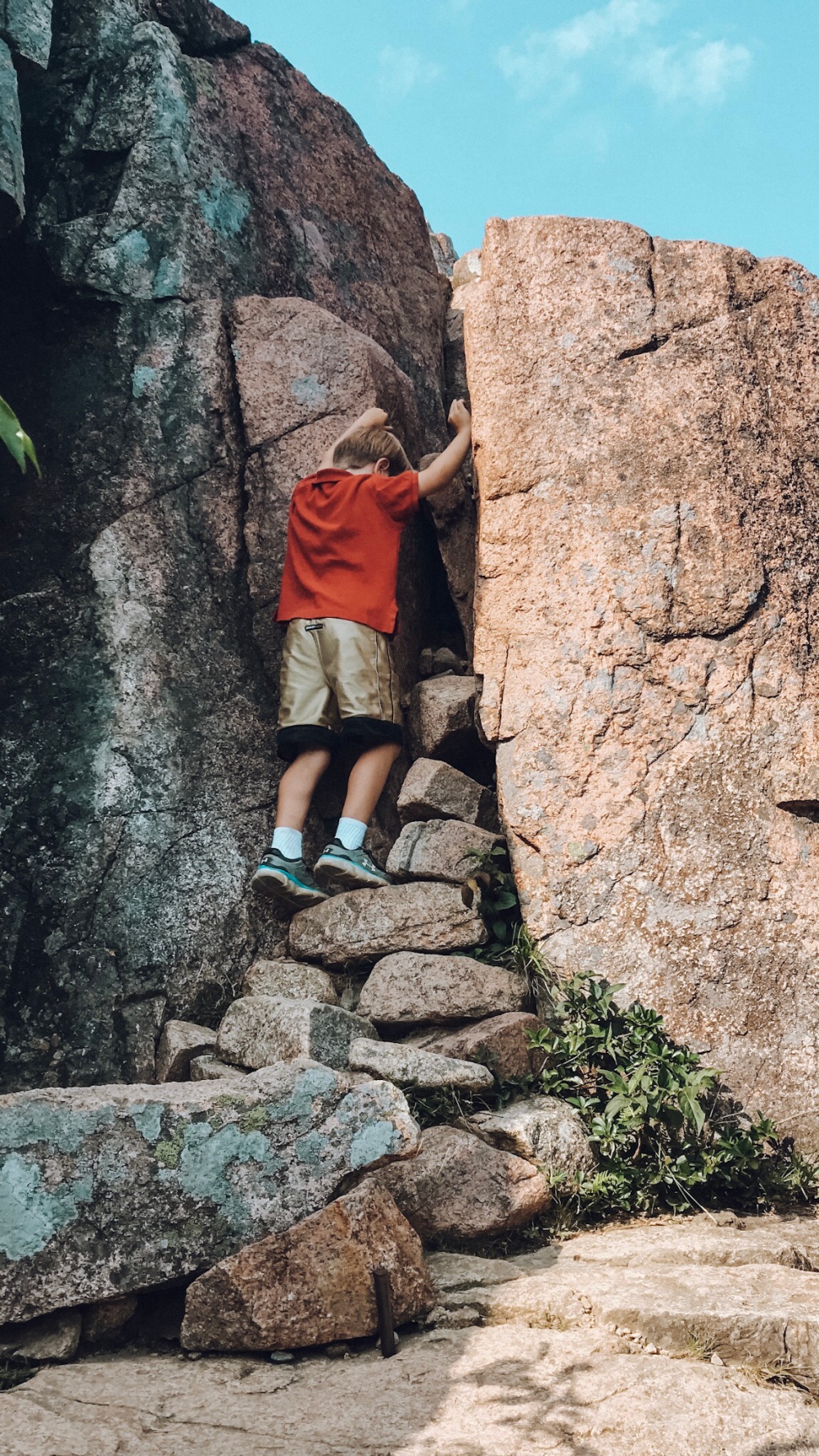 past the point of no return… 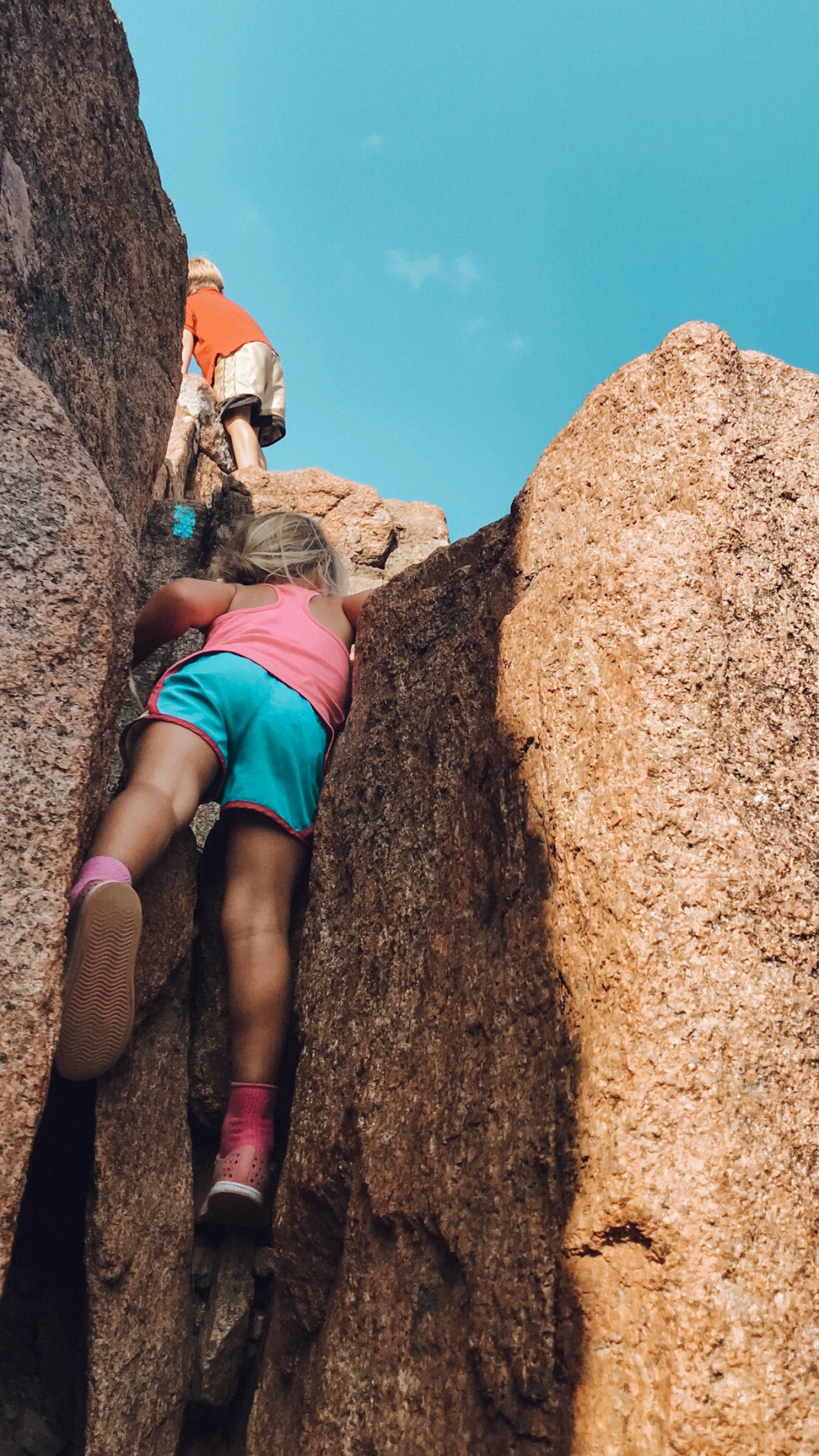 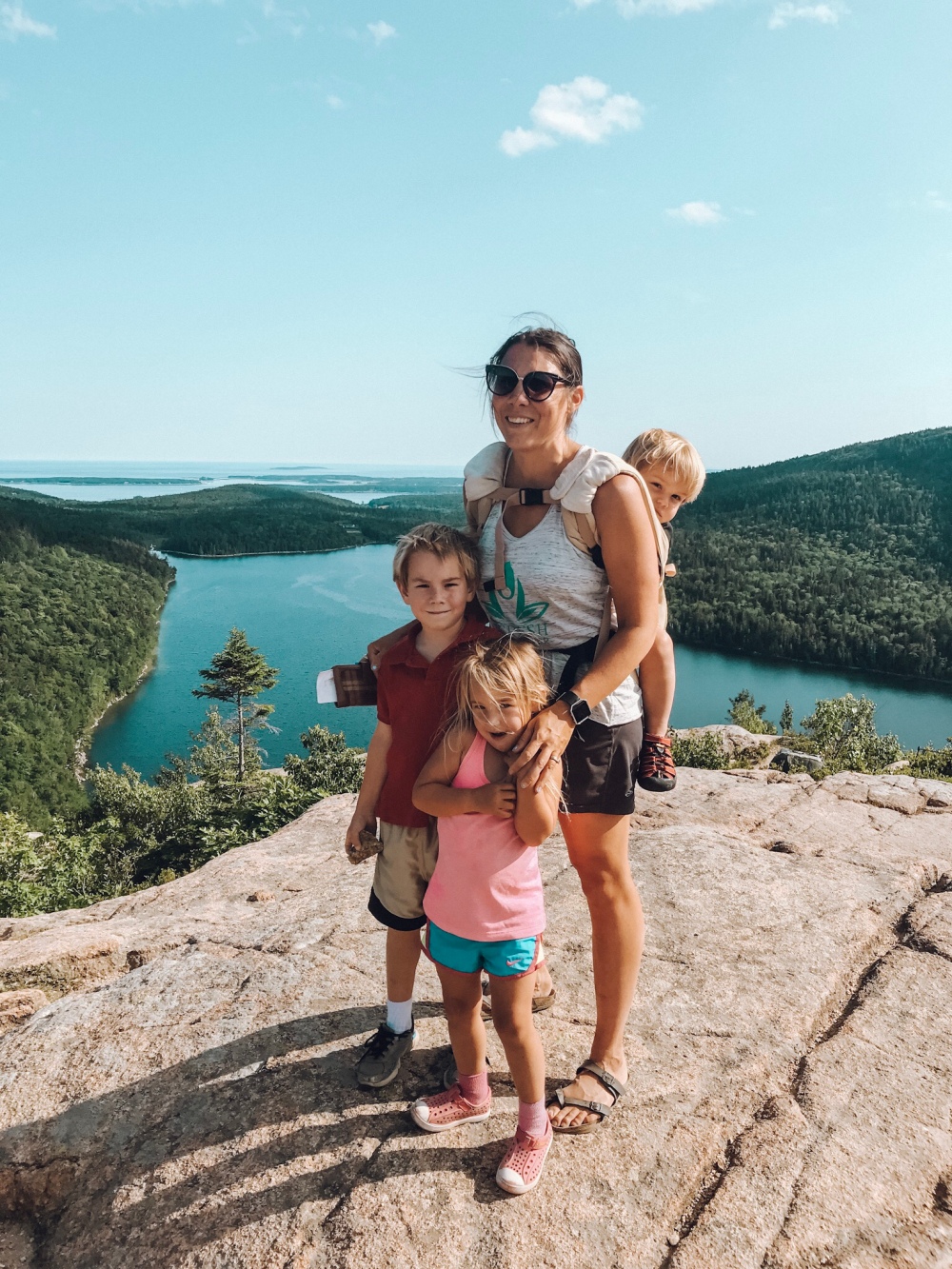 After that, I needed some time to decompress and let all the adrenaline and nervous energy out and let the gratitude for what we survived, really, sink in. We spent abut an hour at Jordan Pond playing and taking in the majesty and splendor of the lake. 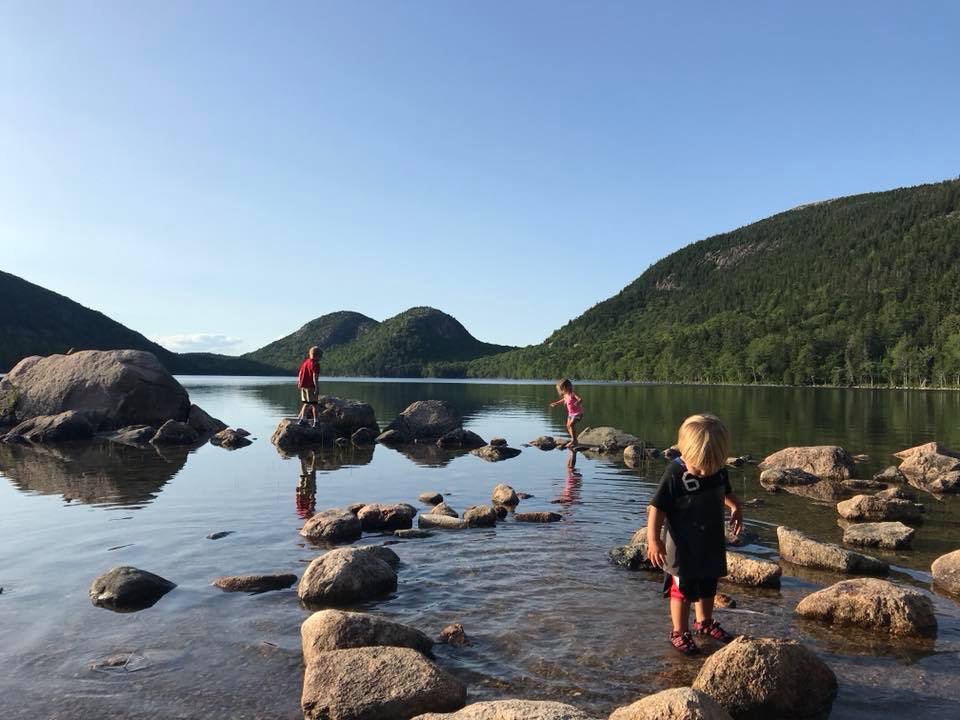 Once we were nice and relaxed, we walked back to the car. From there we knew we wanted to watch the epic sun set atop Cadillac Mountain, but we didn’t really have time for a proper dinner before that. So we grabbed a picnic dinner at Hannafords, which consisted of a roast chicken, some crudités +hummus, fruit and drinks. We left Hannafords and drove up to Cadillac Mountain again to catch the sunset. It was gorgeous and amazing and all the things, but also a little chilly! So make sure you pack a sweater. The kids LOVED the picnic idea and it really allowed us to take our time and relax on top of the mountain. 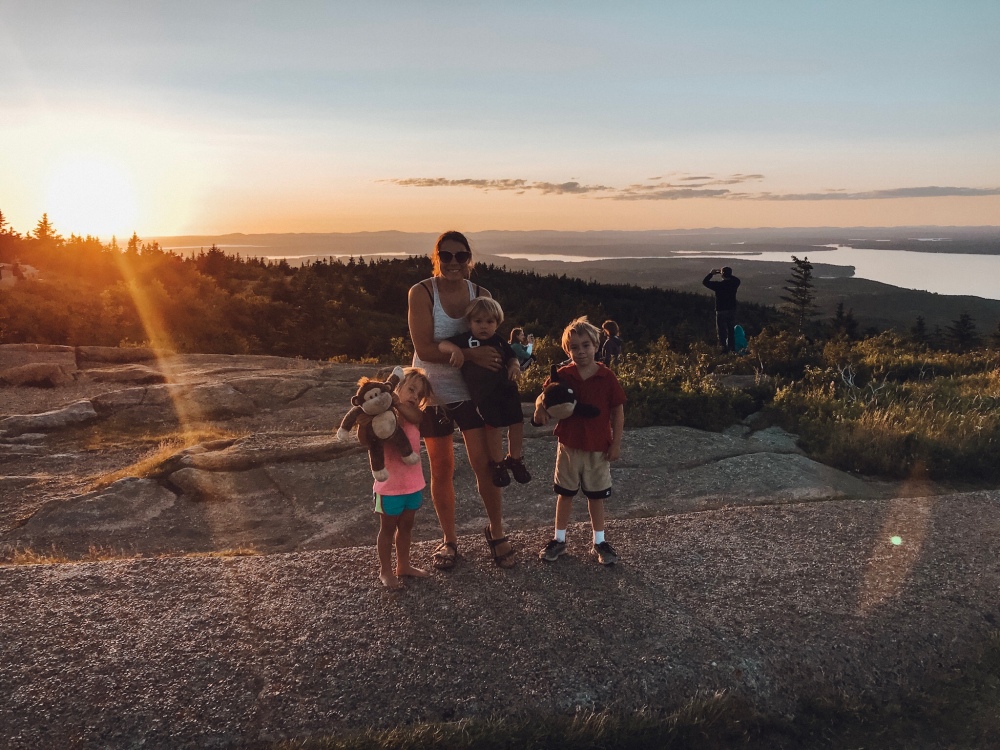 After the sun set, we went back to the Hampton Inn, changed into long sleeves and jeans, grabbed some lobster Mac and cheese and headed out AGAIN to catch some of the Star-gazing at Sand Beach. I wish I were able to capture how crisply and clearly you could see the stars. It was unbelievable and it was so cool to listen to the constellation narration and see the sparkly constellation images that they pointed out with their powerful light laser against the back drop and peaceful noise of the crashing ocean waves. I felt like we were properly lulled by nature into that sleepy state, so we drove back to the hotel and crashed around 10pm.

Day 3: We woke up early, grabbed a quick breakfast and headed to Sand Beach. We were there by 8am, which was good because the parking lot was pretty much full by 10am. We had a great parking spot, however we only played there for about 45min 🙄. In their defense it was still a little cool and the kids liked playing “tag?” with the waves. It’s that game kids love where you run towards the ocean to try and catch or run with the waves and then turn around and race back to the beach when the waves thunder back into shore. Anyhow, it was too cold to actually go in, so when they tired of this game, we hopped into the care and went to Thunder Hole. This was also really fun! I don’t really know how to describe it, but you could literally walk out onto this rock precipice that was guard-railed off from the water and wait for the ocean waves to come crashing into this channel. When it really got going, it sounded like thunder and crashed upon the rock face so hard that it sprayed upwards (and outwards and everywhere) soaking everyone in its wake. Nature is just so cool. 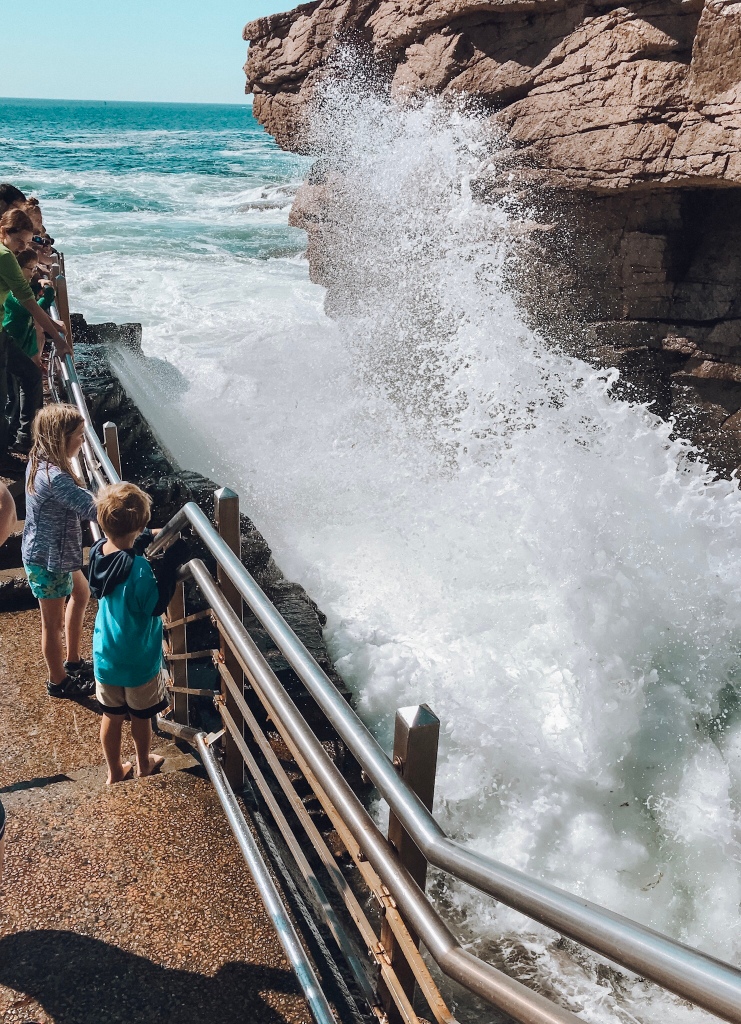 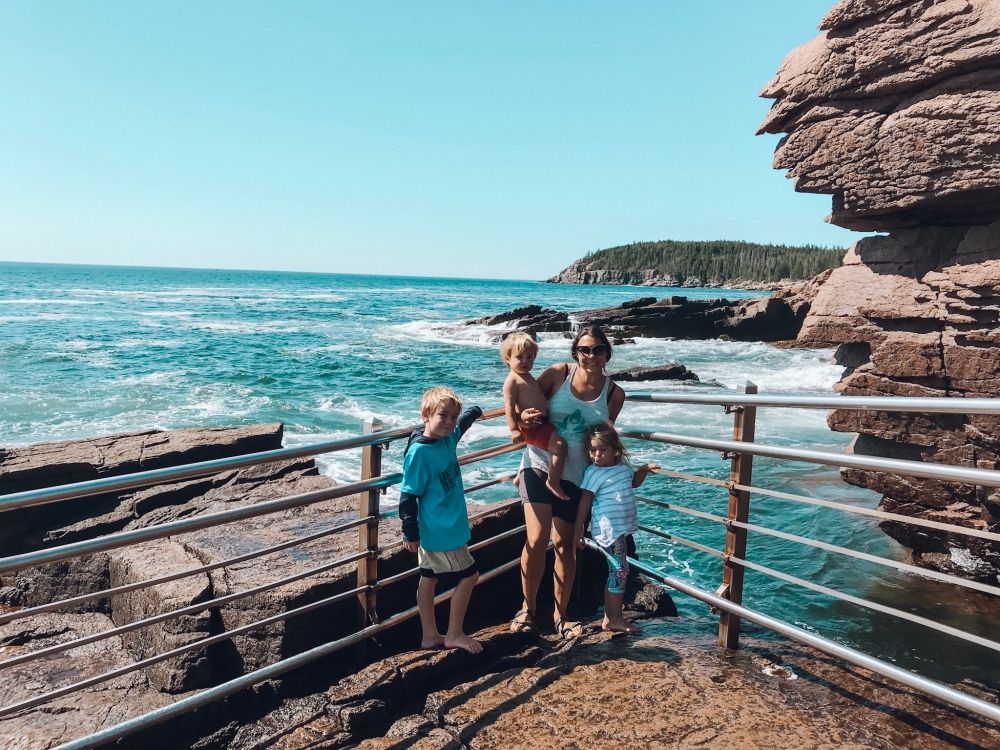 After spending about 30-40 minutes at Thunder Hole we crossed the street and hiked Gorham Mountain. The kids loved this one because there were blueberries everywhere on this hike. I think they ate their weight in blueberries… good thing too, because I actually ran out of snacks! Whoops. 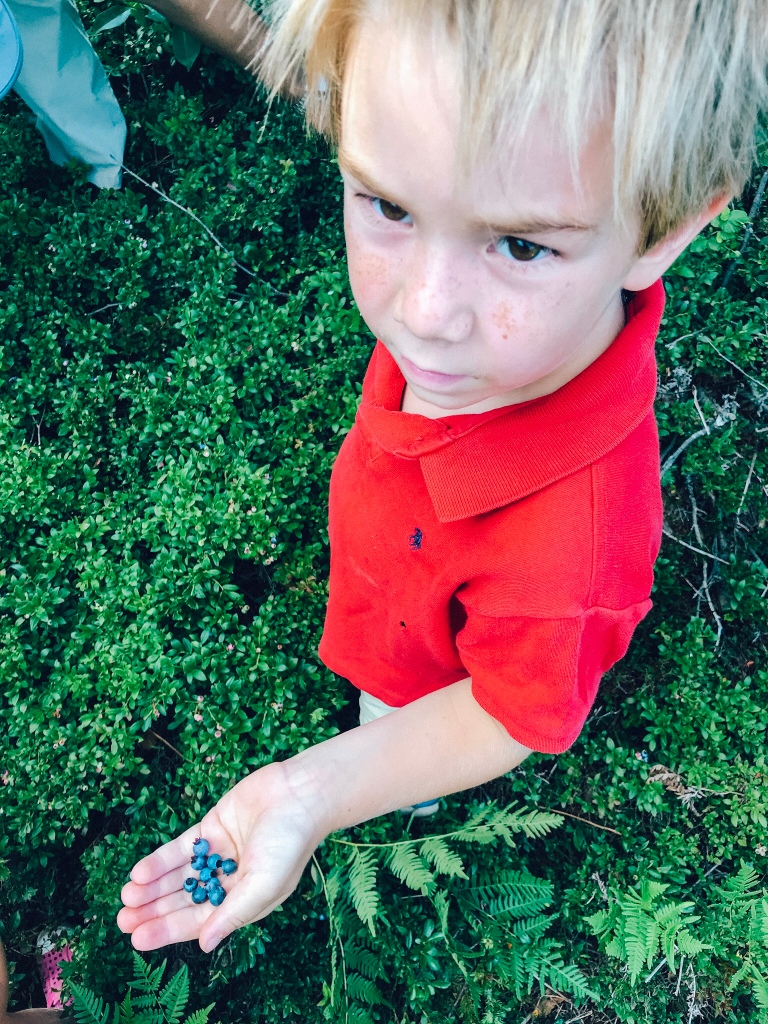 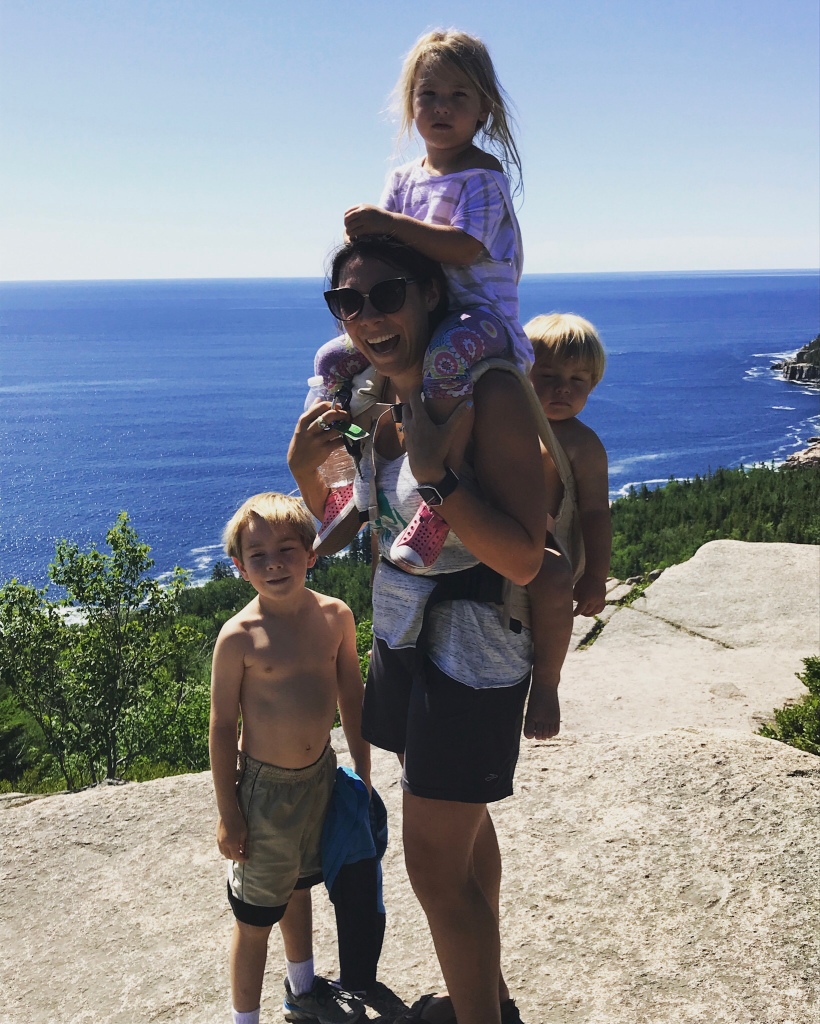 Gorham Mountain took us a good 2 hours round trip. I actually had to call at the top of Gotham Trail to extend our checkout time, lol. The staff said they were pretty used to it and graciously extended me for a few more hours. By the time we came back to hotel we were ready for a quick swim at the hotel before we packed up and checked out.

Once we checked out, I figured we’d better head out to the town of Bar Harbor to watch the tide go out! I really wanted to walk to Bar Island and let the kiddos play in tide pools and look for hermit crabs. Something about watching their curious, excited little faces as they play in the tide pools really makes me happy.

We successfully walked to Bar Harbor and back without getting stuck when the tide came back in. Ha! Which is apparently, definitely a thing that happens to people! Then they’re either stuck until the tide goes out again or forced to pay for a water taxi. It’s gorgeous out there, so there are worse fates.

After an adventure like that, grabbing Ice Cream and snacks in Bar Harbor on the way out was definitely in order! We walked around the town for a bit, which takes all of twenty minutes if you’re just browsing. The town itself is absolutely adorable. So many cute shops, lobster statues and seafood restaurants! 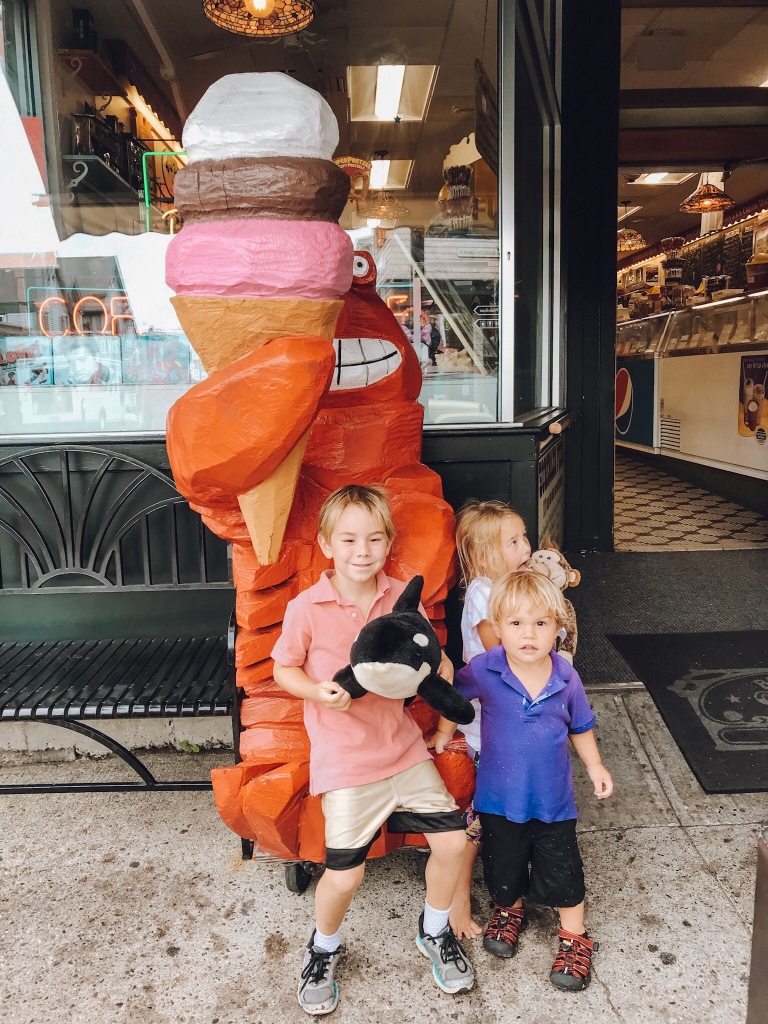 I loved it and could have window shopped and looked around for hours, but the kids were pretty zoned in on Ice Cream, which they had definitely earned. We found our Ice Cream store of choice, loaded up on all kinds of deliciousness (for there and the car, of course) and left Bar Harbor around 3pm. I drove to Saco Bay, which was about as far as I could muster. It took roughly 3 hours and that was about all I had in me! When we arrived we had a giant Lobster dinner and Crashed. 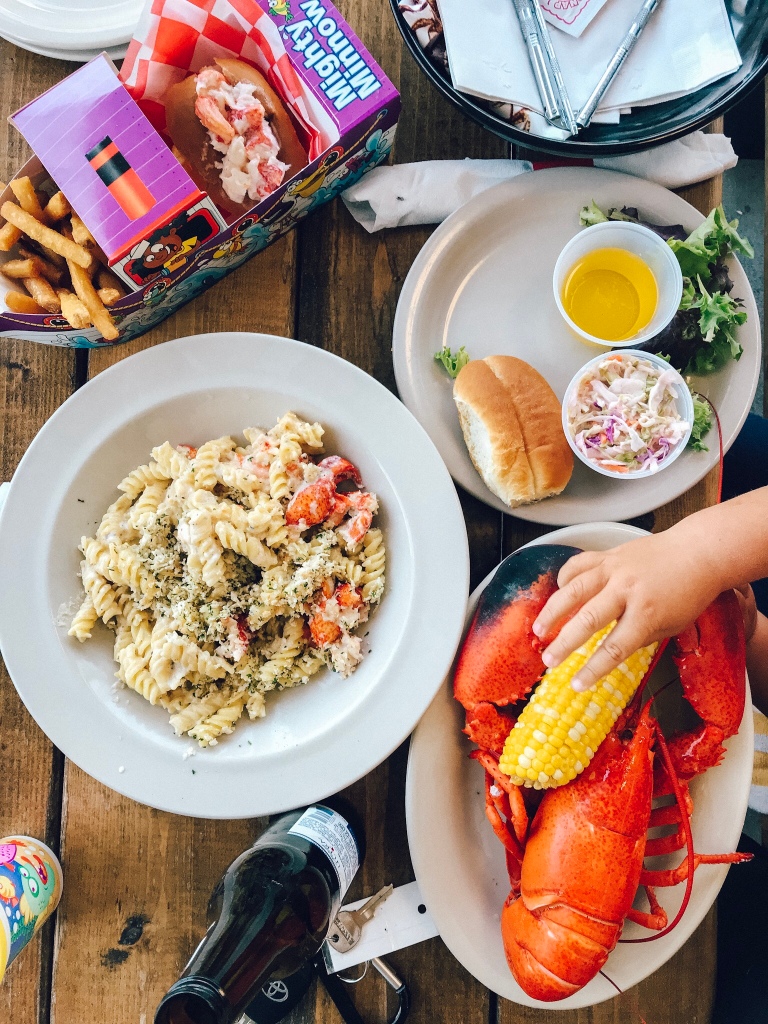 Day 4: We had a nice lazy morning, finally, before setting off for the Berkshires. I love Norman Rockwell and wanted to see and eat at the famous Joe’s Diner, which was his inspiration site for his painting “The Runaway.” We left around noon, drove to the Berkshires (~3 hrs). It took a little doing, but we found Joes Diner and I made my kiddos re-enact that famous Norman Rockwell painting of the police man and the runaway little boy. 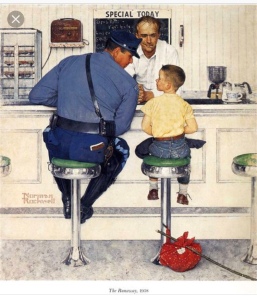 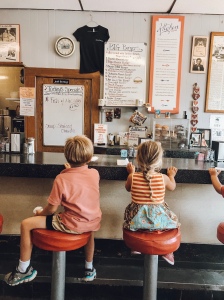 We ate fried hot dogs, fried bologna sandwiches and chocolate milk, paid in cash! Joe’s Diner is old school and cash is the only currency accepted. From there we drove the 20 minutes to Becket and caught the free Inside Out Ballet that was part of Berkshires’ Jacob’s Pillow free summer theater/dance series. That was pretty magical as well. There was a gorgeous amphitheater right smack dab in the middle of the beautiful landscape of the Berkshires with tons of outdoor seating. And let me tell you, that show was PACKED. Folks of all sorts brought picnic baskets, hors d’oerves, wine, snacks, suppers and sat and ate dinner before the show, which was a beautiful contemporary ballet. 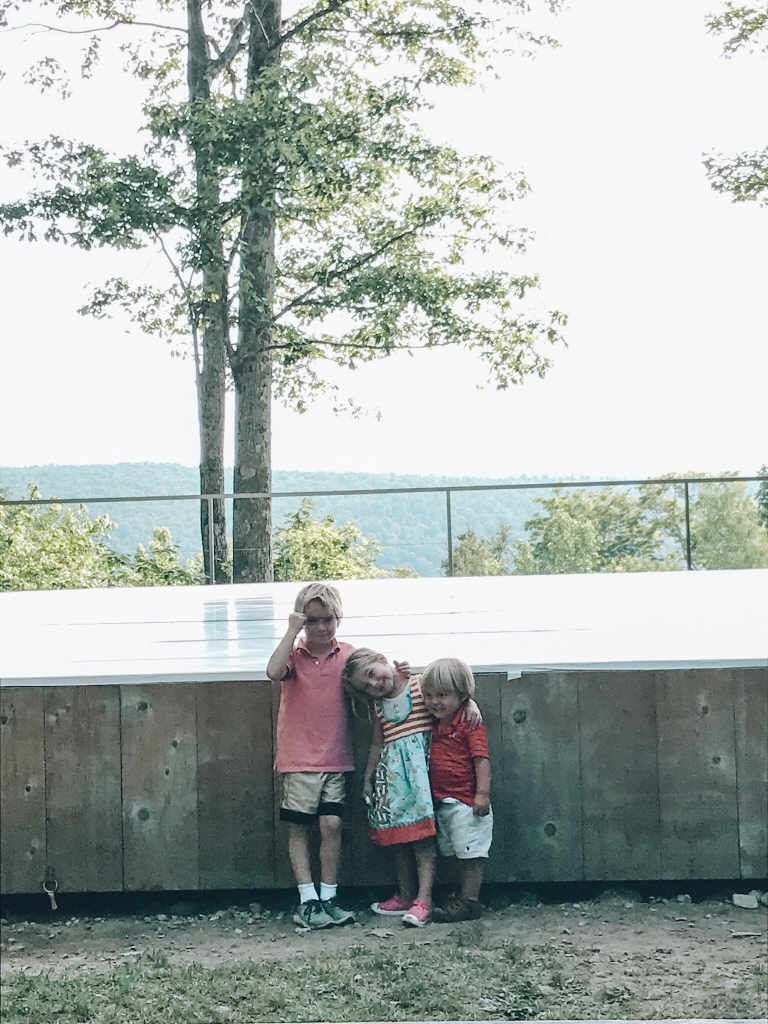 We left the Berkshires around 7pm, got home at 9 and then we crashed… for about a week straight.

And that’s a wrap!