I almost can’t believe I’m writing a post on brussel sprouts! Almost. These were waaaayyyy too good not to post!
I have never been a huge fan of brussel sprouts. They are smelly, big, potent and taste weird. But these are amazing. I can’t take the credit though. I was having dinner at my friends house and she made these life changing sprouts, gave me the recipe verbally and I just sort of went with it. I think the original recipe has red onions, but I wasn’t feeling those, so I left them out and did my thing!

Start with 4 cups of brussel sprouts and cook ’em. You can steam them or boil them, just cook them until they are tender. I filled the pot half way with water and then boiled them for about 10 minutes. Remove from heat and let them cool. You could shock them in an ice bath if you are running low on time, or you could just let them cool. You are going to be re-cooking them anyway. 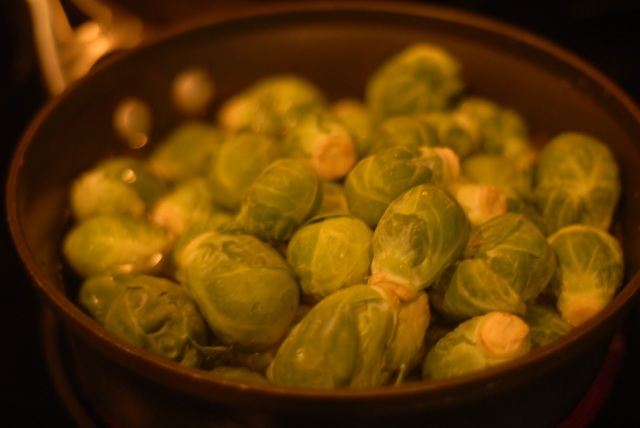 Set those aside and cut 4-6 slices of bacon:

Anyone have any tips on how to cut bacon?! It was a pain in the butt! All slimy and moving all over the place! Maybe partially freeze it first?
Anyway, saute your bacon pieces in a pan over medium heat for about 5 minutes.

Once the bacon looks relatively cooked, add your finely sliced apple and cook for about 5 more minutes.

Now here comes the work. While that is cooking, cut up your brussel sprouts. I halve them lengthwise, turn them on their side, halve them again and then slice them up the sprout. I try to get 2-3 dices before I’m done. This is a bit laborious, but I timed it and it only took me about 12 minutes to do 4 cups. 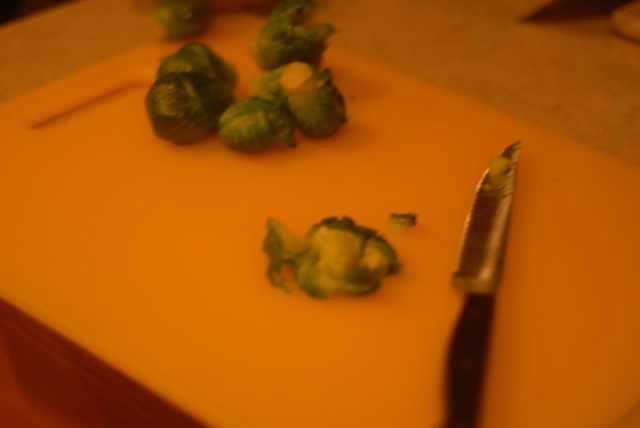 Add the chopped up brussel sprouts to the pan with them bacon and apple. Cook for about 10 more minutes, stirring occasionally. Hit it with a bit of sea salt at the end and voila, the best brussel sprouts you’ve ever had. Sweet, crunchy, salty. Awesome.