I have to say, when I first heard the term “kale chip” I almost laughed out loud at how terrible that sounded. I enjoy kale immensely- in salads, with eggs, steamed, creamed etc. but a kale chip!? Can you really turn a leaf into a yummy chip? No way. So I initially dismissed the idea altogether and actually laughed about it with my husband. Plus, the 1 tbsp of oil for an entire bunch of kale didn’t seem like it would do the job, no matter how much salt, pepper and other seasonings you used. I thought the idea would fade, but it actually became increasingly popular and marketable. I was shocked when I found them in Kroger and decided I had to try and make my own as they were more than $5 for a 2 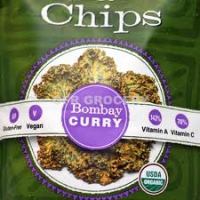 serving bag!! I thought they had to be kidding. However, my curiosity piqued and I decided to surf around different blogs until I found a recipe that sounded acceptible. So I found one on this blog called, “Happy. Healthy. Life” that had really detailed instructions and an idea for making these little chips “cheesy” with a vegan cashew cheese. Plus the pictures made them look REALLY good. So I decided to give it a whirl. Plus I got to use a new ingredient called “nutritional yeast” which I had never heard of before. Apparently it is a kind of deactivated yeast that many vegans use because gives food a cheesy flavor, without needing to use cheese. At this point, my curiosity was piqued again and I was excited to use a new ingredient so I set out to make some kale chips.

I’m not going to lie, the process was a bit laborious, but the chips were actually really good! And they stored nicely too, in a tupberware container. I didn’t buy a bunch of kale, cut out the ribs and then chop it. I just bought the big bag of pre-chopped, pre-washed kale and cut out the really big veins. I don’t know if I have the patience yet to wash it, cut out the veins and then wait for them to dry out. Making the cheese, coating those suckers and waiting about 90 minutes for them in the oven was enough for me…

Anyhow, here’s the recipe I used from Happy. Healthy. Life.

I just took out the kale from the bag and let it dry on baking pans for a bit (while I gathered the ingredients and made this sauce). To make the sauce, you just throw all of these ingredients into a blender (I used a Vitamix) and blend at high speed until it is nice and creamy. I then just took bowls of the kale and coated them with the “cheese” sauce. I then laid them out on 3 lined baking sheets and baked the chips at 200* for 80-90 minutes. They probably would have taken less time if I hadn’t loaded my oven with 3 pans of these, but I had other things I needed to do that day other than wait for 3, 75 minute batches of kale chips! Here is what the Happy. Healthy. Life. kale chips looked like (along with the link to her blog). The author of this blog is vegan and I am not, but I still figure it’s ok to borrow recipes/good food tips from many different diets, cultures etc. I am pretty non-discriminatory when it comes to good food.

See why I wanted to try these?! Don’t they actually look really good?! And here is a picture of mine. She has a much better picture, but I must admit, these did taste really good! And cheesy, I was very pleasantly surprised. Even my little fella like these! But of course he really does like most everything I make. But as a caviat, he ate a bunch of these fresh out of the oven (and cooled), but refused them when I pulled them out of the cupboard a day or two later. Weird.